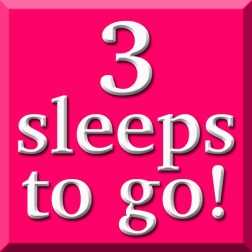 I’m counting the nights of sleep until Wednesday; rather than looking forward to the arrival of Santa.  Following little sleep, in the last few days, Maureen will be going to Alderlea Care Home on Wednesday morning, for a slightly earlier than scheduled Respite Break.  If I’m sensible I will be able to hold the fort until then after a very difficult few days and nights.

Yesterday evening, things became very challenging shortly after ‘Strictly Come Dancing’ when Maureen became convinced that a baby was in danger of hypothermia.  It took me a long time to convince her that the poor little mite was safely wrapped in a blanket.

During the night she woke several times; initially convinced we were about to go into battle.  Then she was searching for a missing teenage grandchild.  Later on, she was shouting for her mum because she thought she had swallowed a marble.  She then returned to the missing baby theme as I was making her an early morning cuppa.

I always try to go with Maureen’s reality and resist arguing with her concerns.  However, on a couple of occasions, I have found it difficult to provide the reassurance that she is obviously seeking.  When I told her that her granddaughter was probably tucked safely up in bed in Coventry she called me a liar.  Obviously, I got that one wrong but when you are woken in the middle of the night it’s not easy.

Today’s carer will be here at noon and I’ll be heading off to the Sauna and Spa at Cleethorpes Leisure Centre!