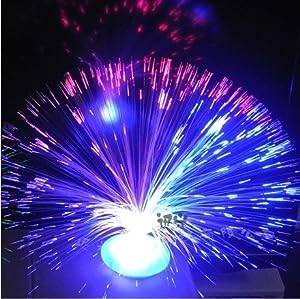 I had a surprise birthday present yesterday; a fibre optic light I had forgotten I had ordered on eBay.   It was a cheapie and no instructions were included, so it took me a while to get it working.  From what I have seen so far it might just provide soothing light; even a  diversion when the going gets tough.

Half day closing yesterday at our Medical Centre meant that it wasn’t possible to check if Maureen has a UTI.  Even the collection of the sample caused problems with Maureen telling me ‘that Lady ( Girl Thursday) had made her feel a fool’ by correcting her approach to water collection.  I’m hoping that things go a little more smoothly in the morning and we can check if antibiotics are needed.

I’m beginning to wonder if we are now trying to shut the door after the horse has bolted.  It is possible that professional staff encouraging Maureen to widen her social circles and become more active could well be too little too late.

I think it is important for me to remain focused on minimising Maureen’s distress.   Those who have decided the Best Interest Meeting is the way forward could well be contributing to Maureen’s decline by scaring the living daylights out of her.

Posted live at 2 am as ‘Storm Maureen’ has been raging for an hour!

2 thoughts on “Dementia: Seeing The Light”