On Wednesday I received the sad news that a neighbour had passed away.  I delayed telling Maureen the news until the next day, as I feared it would cause a certain amount of distress.  Once again I was wrong as Maureen remembered with fondness an elderly lady across the road who had scolded her for being out by herself.  She still tells the story of an 86 year old woman with dementia, running down the road to bring her back home to me.  Later in the day, she showed great compassion to the grandson of the deceased when I invited him to our house to share our sadness over his loss. 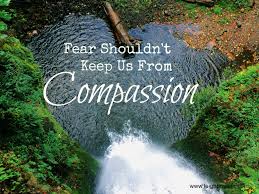 During the afternoon Maureen was again in a compassionate mode as she tried to console me over the pain I was experiencing in my legs.  Once I shared the news that a medical opinion was needed, to seek advice over my restricted movement in both legs, her concern was palpable.  Unfortunately, she got the wrong end of the stick and it took me a while to understand how her compassion turned to fear.  It was only when she shared that perhaps she would need someone to come and stay with her that I grasped the significance of her concern.

I think Maureen believed that a stay in hospital would follow my visit to seek physiotherapy treatment this morning.  She shared that she had mistakenly been thinking that her deceased daughter would come up and stay with her in my absence.  Her thoughts are quite understandable as I will be returning to the hospital where I had both hips replaced.

Maureen is in a state of panic this morning with the prospect of my early morning visit to the hospital looming.  Her initial concerns have been about us being on time.  Now she is worried that she doesn’t know what to wear; alongside a thought: ‘if she doesn’t know how to dress they won’t let her go home’.  It’s clearly one of those occasions when I should have said nothing and gone for my hospital appointment alone!

I realise that most of the time I’m guessing how Maureen might be seeing things.  I must confess I have no idea why a publication that the Care Coordinator left for her consideration was first placed behind the sofa and then wrapped in a fleece.  My guess is because it was from the Alzheimer’s Society but I will never know.  What I do know is that Maureen is still a compassionate woman who is often frightened by her reality and attempting to minimise her distress remains my priority: not causing it – as I have clearly done at the moment!